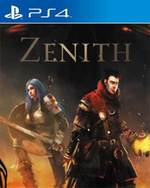 Zenith is an action RPG that combines that feel of the golden era RPG games with a generous dose of humor and parody. The game counts with a solid story which unfolds in a fantasy world populated by dozens of unorthodox characters.
open_in_new Official website

I'm around 10hr (straight storyline) in this game. This what you we play video games for! I would give this a higher rating but its flawed with bugs and jittery graphics and controls. It's indie and it seems indie. Outside of the immediate gameplay issues the dialog, story, sarcasm, and parody make it good.

Your main character is a drunkard mage (do pay attention to the flash backs as they make the present hilarious). The game is littered with comedy. I found myself actually laughing out loud especially at the final fantasy character reference and design. The character movement and attacking graphics are jittery at best. It's like playing on old school internet and you are lagging/glitching all over the screen. There is no fluid movement at all yet I'm loving the game. Like anything I've just adapted to it. The equipment screen is glitchy. I've had to re-enter the same screen several times from time to time in order to equip something especially health potions.

Once passed the gameplay issues you will find an awesome game to enjoy. This should definitely be in a back-catalog for all rpg lovers.

1.00
Jim Sterling—Sep 30, 2016
Zenith isn’t just badly made – it’s appalling. A boorish, cynical failure of a comedy game broken in ways I’ve never before seen. The fact it somehow – everso rarely – manages to show a glimmer of wit under all the misery only worsens the deal, highlighting how this could have perhaps been something decent before it was run through whatever thresher led to it becoming the mangled carcass it is.
open_in_newRead full review

4.00
Erin Castillo—Sep 27, 2016
While the humour seems to be the centre of the game, Zenith has some major fundamental flaws that make it less fun to play and all the more frustrating. If you like the story, the writing and the humour, it might be worth your time. If you need fluid controls and care about the combat and game mechanics, then absolutely not.
open_in_newRead full review

4.00
Ashley Howell—Oct 16, 2016
We can't, however, wholeheartedly recommend it. The technical problems marred the experience, and along with the stripped down mechanics and useless, uninspired AI, it all adds up to ensure a bland and unpolished experience.
open_in_newRead full review
See all critic reviewsarrow_forward