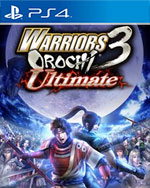 Warriors Orochi 3 Ultimate is an enhanced version of the hit action game Warriors Orochi 3, once again combining the much loved heroes of the Dynasty Warriors and Samurai Warriors series. The mythology of the Orochi universe expands with a new main storyline, which brings the heroes together again into the chaos of battle as they are summoned upon by a mysterious stone. The adventure is complemented by side stories offering over 175 scenarios and endings to uncover, including the ability to battle from the point of view of various characters and even “what if” hypothetical stages that exist in a parallel world.

3D Juegos
1 Rating
7.00
This game has not been reviewed. Be the first to review it!

7.30
Kestutis Kalvaitis—Sep 30, 2014
Warriors Orochi 3 Ultimate offers lots of replayability with a deep roster of characters that will appeal to fans of the series, but offers little to newcomers not already invested in the Musou style of gameplay.
Read full review

8.00
Paulmichael Contreras—Sep 03, 2014
It may still be more or less the same combat as any Warriors game preceding it, but new tweaks here and there do help to change things up in fun ways. If you’re new to the series, this is as good a time as any to dive right into things. If you previously bought the game on the PS3 or Wii U, this upgrade will likely tide you over until a proper “next-gen” release, which should be here before you know it. Once again, I have been pleasantly surprised by Omega Force.
Read full review

7.00
Jim Hargreaves—Sep 11, 2014
Overall Warriors Orochi 3 Ultimate is more than just a competent port thanks to its new game modes and some slight gameplay refinements. With that said, it does carry the same flaws found in the original release and could also be seen as outdated with Samurai Warriors 4 just around the corner. In other words, this is definitely one for the fans.
Read full review
See all critic reviews