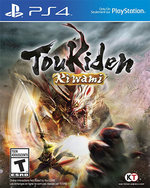 Go forth and eradicate the epic 'Oni' menace!

'Toukiden: Kiwami' is the sequel to 'TOUKIDEN,'consisting of all the content from the original title plus the addition of various elements and stories. Players take on the role of a Slayer possessing unique abilities, and alongside other Slayers, battle the Oni to save mankind from destruction. Band together to unleash the 'United Destroyer' attack and experience the ultimate Targeted Destruction System!

Amazon open_in_new
55 Ratings
8.20
This game has not been reviewed. Be the first to review it!

7.00
Mark Labbe—Mar 31, 2015
But, other than being annoyingly repetitive, Toukiden: Kiwami is a fun game. Thanks to a large amount of weapons and armor to choose from, and characters that not only exist as chattable civilians but also as bloodthirsty warriors, you can spend a lot of enjoyable hours on Toukiden. If you’re a fan of either Monster Hunter of the Dynasty Warrior titles, you might want to give it a try.
open_in_newRead full review

7.00
Bradly Storm—Mar 31, 2015
Toukiden: Kiwami is a great entry in the PlayStation 4’s catalog, specifically due to the lack of its genre’s presence on the machine. It builds off of last year’s Vita game in intelligent ways to make it the definitive Toukiden experience. It has its shortcomings, but they don’t hamper the enjoyment that can derived. Its action is fluid and fast, its customization options plentiful. Its setting is also compelling, if for nothing else than for the fact that it’s not a frequently employed one.
open_in_newRead full review

9.00
Christian Chiok—Apr 12, 2015
Overall, combat is smooth, avoiding the more sluggish and sedate gameplay of some similar titles in the genre. The camera control is great and the use of lock on really helps when trying to take down the Oni with multiple combos and attacks. It’s honestly just plain fun to play. ...Toukiden Kiwami is definitely a great action RPG; while it isn’t as polished as the Monster Hunter series, this clone is definitely one of the best.
open_in_newRead full review
See all critic reviewsarrow_forward