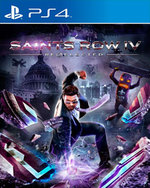 In Saints Row IV, the head honcho of the Saints has been elected to the Presidency of the United States. But the Saints are just getting started. Now the larger-than-life insanity of the Saints series gets a new twist with a catastrophic alien invasion, and the aliens have transported the Saints to a bizarre Steelport simulation. Wield gargantuan superpowers and fight to free humanity from alien granddaddy Zinyak’s mental grasp. Escape the simulation that’s trapped the Saints crew, or die trying.

8.00
Alex Carlson—Jan 22, 2015
Saints Row IV is still one of the best open-world games ever made, a landmark in creative freedom unbound by the narrow halls of logic or coherence. Delivering a near-endless supply of side-content and addictive combat, Saints Row IV is ridiculously easy to recommend, but Re-Elected’s limited enhancements and unwelcome technical issues keep this version from being the definitive version that it should be.
Read full review

7.60
Travis Huber—Jan 20, 2015
The graphics feel last-gen, the addition of voice commands doesn’t really even warrant mentioning, and overall it still felt like I was playing the exact same game from the last gen systems. So if you still have your PS3 or XB360, keep playing SRIV on those systems. It’s just not worth the price of buying it again just to play the same game on your PS4 or Xbox One.
Read full review

8.00
Lee Bradley—Jan 23, 2015
Saints Row IV: Re-elected may score low in terms of its visual overhaul, but the game’s ability to amuse and thrill is undiminished. This is a riotous experience that prioritises fun over everything else and thanks to the generosity of Volition it’s bigger than ever, with five extra hours of gameplay in the form of previously-released DLC and the brand new Gat Out of Hell expansion. Not played Saints Row in a while? Give this one a bash.
Read full review
See all critic reviews