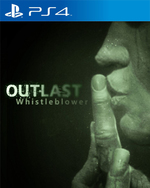 This game requires the base game Outlast to play.

Whistleblower will let you play as Waylon Park, a software engineer under contract with Murkoff and the man who emailed journalists around the world - including Miles - at the beginning of Outlast. Spending a couple of weeks at Mount Massive, during which he was unable to even talk to his wife and son thanks to strict security protocols, Waylon developed a deep-seated distrust of the profit-motivated scientists and doctors leading dangerous and irresponsible experiments on their patients. Identifying with those poor souls fueled Waylon's anger, and set the stage for his unmasking of Mount Massive's rotten core.

3D Juegos open_in_new
9 Ratings
8.40
This game has not been reviewed. Be the first to review it!

6.40
Marty Sliva—May 08, 2014
Outlast: Whistleblower delivers more of the same gruesome locales and jump-scares as the core game, but doesn't introduce much new to the horror experience. Its sound design is still top notch, and it took me to some dark places that few video games ever dare to go. But while Whistleblower sheds a bit of light on the mysteries of the original, but ultimately feels far too familiar, far too often.
open_in_newRead full review

8.00
Graham Banas—May 07, 2014
Outlast: Whistleblower doesn’t muck around with a formula that’s already proven to work, and it subsequently succeeds at extending the spooky atmosphere of Red Barrels’ survival horror release. The new campaign accompanies the original game well, and even improves upon it in many ways. It also ups the ante in the terror department, hitting harder and more frequently, without relying too heavily on jump scares. As such, if you liked the main game, this expansion is a real scream.
open_in_newRead full review

Bendy and the Ink Machine