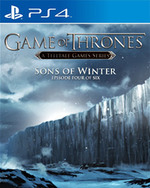 In Episode 4, the fate of the scattered Forresters hangs in the balance, and no one allied with the family is safe. An unexpected meeting offers Rodrik a new opportunity to free Ironrath from its Whitehill stranglehold, but with young Ryon Forrester still held prisoner, his next moves are critical. Gared must abandon Castle Black and venture beyond the Wall in search of the mysterious North Grove, risking encounters with Wildlings and worse. In King's Landing, the population is reeling from a recent royal death, and Mira must step carefully in an increasingly complex game of politics where secrets are traded as currency. Far away in Essos, Asher infiltrates the slave city of Meereen at the behest of Daenerys Targaryen, but will the friendship he holds dear break under the strain of a mission that raises memories best forgotten?

Game Faqs
33 Ratings
7.06
This game has not been reviewed. Be the first to review it!

6.00
Thomas Ella—Jun 01, 2015
Telltale’s Game of Thrones series, now over halfway through its first season, has been a huge disappointment so far, but it’s been improving steadily, and Episode Four – Sons of Winter proves there’s real potential in the concept, even if Telltale might not have been the right candidate for the job. There are the occasional flashes of brilliance here that make you wish the series as a whole could match the same level of quality, but they’re appreciated anyway.
Read full review

8.50
Luke Brown—May 28, 2015
"Sons of Winter" moves the plot of Telltale's Game of Thrones a steady clip, and there were some memorable moments throughout.
Read full review

7.00
Graham Banas—May 29, 2015
Game of Thrones: Episode 4 - Sons of Winter doesn't hit quite the same highs as its immediate predecessor – but it's likely to prove the most impactful instalment to date. The decisions made this time around reek of future importance, and the impending doom for House Forrester seems closer than ever before – even if the overall story's pace has, once again, slowed just a tad.
Read full review
See all critic reviews

Minecraft: Story Mode - Episode 1: The Order of the Stone

Minecraft: Story Mode - Episode 4: A Block and a Hard Place

The Walking Dead: Michonne – Episode 2: Give No Shelter