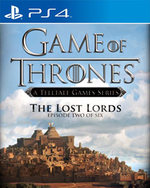 House Forrester is in disarray. Their liege lord and his heir are dead, Ironrath is occupied by Whitehill soldiers, and the youngest member of the family has been taken from them. The survival of the family now depends on a handmaiden, a squire forced to take the black, and an exiled son.

At King’s Landing, Mira Forrester must weigh her loyalty to Margaery Tyrell against the needs of her family, all the while choosing how to play the political games of Tyrion Lannister. To the far north, Gared Tuttle finds that the wall and its crows hold little love for a squire from the Wolfswood, but finds kinship in the bastard son of Ned Stark. To the east, in far-away Yunkai, Asher Forrester, the exiled son, is called back to Westeros to aid his family, but how can one man help when the Boltons rule the north with an iron fist?A misstep by any one of them could spell doom for the entire family.Meanwhile, an unexpected source of hope returns to the Forresters, but Ironrath is no place for the weak.

Amazon
2 Ratings
10.0
This game has not been reviewed. Be the first to review it!

7.00
Ben Kuchera—Feb 03, 2015
The story being told in Telltale's Game of Thrones continues to move along in "The Lost Lords," but I have a better idea of what's at stake now. The pace remains slow, but at under two hours the episode won't stress even the most fickle players.
Read full review

7.60
Angelo M. D'Argenio—Feb 02, 2015
Personally, I think that Telltale's designers are spreading themselves too thin by including four main characters, each in a different setting, each with a different goal. Since they devote the same amount of time to each character, it ends up feeling as if very little is accomplished by any of them. ...For now, I care about this story enough to keep playing, and I would recommend Episode Two to anyone who played Episode One. However, this is definitely one of Telltale’s weaker episodes overall.
Read full review

7.00
Mark Labbe—Feb 13, 2015
Overall, The Lost Lords is a bit of an improvement over the first Game of Thrones episode. Although the character transitions are a bit confusing and making decisions doesn’t seem as impactful as it should, Episode Two is by far more political and more interactive, giving players a chance to both think critically and have some QTE fun. As with the end of the first episode, I left this one wishing I could jump into the next episode right away, but unfortunately, players will have to wait another month or so for that to happen.
Read full review
See all critic reviews

Lords of the Fallen

Schrodinger's Cat and the Raiders of the Lost Quark

The Heavy Rain and Beyond: Two Souls Collection