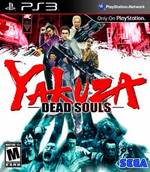 Yakuza: Dead Souls is set in the infamous red light district of Tokyo, which is under attack from hordes of zombies. Players will not only face armies of the undead and incredibly powerful mutants, but a treacherous Japanese underworld that is just as merciless. Playing through the eyes of four of the most infamous characters of the series, witness allegiances shift quickly and the line between friend and foe lost. If you thought zombies were bad ... meet the Yakuza!

Gamestop open_in_new
16 Ratings
8.80
This game has not been reviewed. Be the first to review it!

6.00
Kat Bailey—Mar 16, 2012
Mostly, I see Dead Souls as a fun curiosity. Having lived in Japan for three years myself, I've always enjoyed the Yakuza series for the nostalgia; and with a few major exceptions, Yakuza: Dead Souls is more of the same. It's just as raunchy, absurdist, and most importantly, Japanese, as always. And that makes it a welcome addition to the marketplace, warts and all.

7.75
Phil Kollar—Mar 19, 2012
The clever script provided many laugh-out-loud moments, and the monster variety and leveling system made me feel powerful even against hundreds of opponents. Like a slightly more presentable Deadly Premonition, Dead Souls mimics B-horror movies. It has a blemished, blood-soaked face that’s going to scare off some gamers, but there’s a lot of heart and fun to be found by those willing to dig beneath the ghoulish surface.
open_in_newRead full review

7.00
Angelo M. D'Argenio—Mar 13, 2012
Overall, Yakuza: Dead Souls really only survives on its novelty value. That's not necessarily a bad thing if you are a longtime Yakuza fan. If all you really want to do is see your favorite Yakuza characters acting like cartoony parodies of themselves during a zombie apocalypse, then this is the game for you. For the rest of us, you won't lose anything by passing this game over. If you are a newbie and you want to get into the Yakuza series, pick up Yakuza 4 instead.
open_in_newRead full review
See all critic reviewsarrow_forward