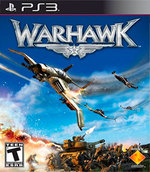 Experience the thrill of white-knuckle aerial combat with hundreds of enemy fighters, bone-crunching armored assaults and high-intensity infantry combat in a massive, all-out war fought on both the ground and in the skies. Through various gameplay modes such as Team Deathmatch, Territories Mode and Capture the Flag, players engage in cooperative online play or fend for themselves against a barrage of enemies in thrilling combat. During battle, players can take command of the most advanced war machine in the fleet, the Warhawk, capable of aerobatic dogfights at high speeds or hovering over ground troops providing tactical support. Players continue the battle on foot with an arsenal of weaponry including rifles, flame throwers, grenades and more.

Gamestop
3 Ratings
7.00
This game has not been reviewed. Be the first to review it!

9.00
jkdmedia—Sep 06, 2007
Simply put, Warhawk is what gaming dreams are made of and the reason you will want a PlayStation 3. Yes, its complex controls require a lot of patience but once you get the hang of it you will be completely hooked by the intense action that makes these online battles such an addictive joy. This is one of the PS3’s finest titles that really shouldn’t be missed.
open_in_newRead full review

8.60
Game Trailers—Sep 02, 2007
The fluidity’s cup run-eth over, with a solid frame rate that never dips, not even in 16-on-16 bouts, with Warhawks canopying the sky with missiles and machine gun fire. While not cel-shaded, the game has a very distinct look that brushes up against cartoony, and goes well with the type of carnage the game unleashes. Explosions are sweet, while rag doll deaths are actually muted for a change and fun to watch. The maps, while all on the same side of the terrain tree, are still distinct enough to invoke immediate responses and favorites.

8.00
Will Freeman—Oct 15, 2007
Some will bemoan Warhawk's slender level count of just five and others may feel it is a little basic, but that is just where it succeeds. It is a next-generation title at a last-generation price that boils gaming down to its purist form. Warhawk is a cheerily violent and fantastically developed version of playing with a dusty box of army-themed toys, and it is enormous fun.
open_in_newRead full review
See all critic reviewsarrow_forward