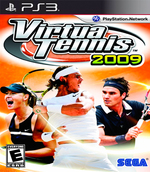 Virtua Tennis 2009 allows you to take on the world's top tennis players. Take on the likes of Rafael Nadal and Roger Federer or play as Maria Sharapova against Venus Williams to recreate some classic court battles. Joining this impressive roster of tennis stars are Andy Murray and ladies French Open champion Ana Ivanovic. In addition to the traditional singles, doubles and mixed doubles matches, Virtua Tennis 2009 also has the official Davis Cup license, giving players the coveted opportunity to lead their country to glory.

Gamestop open_in_new
4 Ratings
4.00
This game has not been reviewed. Be the first to review it!

7.00
Matt Helgeson—Sep 22, 2009
Negotiating all the contracts necessary to make a real tennis experience might be mission impossible. Still, there's got to be a better way than this. The Top Spin series, despite its gameplay issues, at least made an effort. Virtua Tennis needs to try much harder if it's going to regain its title as the preeminent tennis franchise.

6.00
Nate Ahearn—Jun 12, 2009
Sumo Digital needs to turn their focus to changing the gameplay dynamics and World Tour mode, along with solidifying the connectivity issues online if they want to keep pace with the other tennis titles of the world.
open_in_newRead full review

6.00
Tom Mc Shea—Jun 23, 2009
It's a shame that Sega didn't capture the frenetic energy of the minigames in the rest of the game. There is a distinct lack of energy in Virtua Tennis 2009 that makes the experience feel dull and lifeless. From competitors that don't seem to care whether they win or lose to mechanics that are accessible but lack depth, Virtua Tennis gets stale within a few hours.
open_in_newRead full review
See all critic reviewsarrow_forward