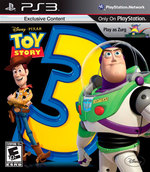 The PlayStation 3 version of Toy Story 3 gives gamers even more excitement with exclusively feature content and gameplay. Emperor Zurg, one of the most beloved villains of the Toy Story franchise, is a playable character here in the game's Toy Box mode. As the sworn enemy of the Galactic Alliance, Emperor Zurg enters the video game's Toy Box mode complete with his sphere-shooting cannon and speed on wheels to unleash mayhem on Woody's Western Town.

3D Juegos open_in_new
9 Ratings
7.50
This game has not been reviewed. Be the first to review it!

8.00
Thomas Williams—Jul 09, 2010
As the Toy Story series comes to a close, the series finally receives the video game treatment it deserves. Avalanche Software took it upon themselves to make one of the best games, if not the best game based off a CGI animated film and it shows clearly. Even though the Story mode can be a bit too difficult at times, the Toy Box mode helps the game rise above the rest. Gamers and fans of the series of any age should take the time to enjoy Toy Story 3 the video game.
open_in_newRead full review

7.00
Tom Mc Shea—Jun 15, 2010
Toy Story 3 may not be able to reach the lofty heights of Pixar's movies, but it is a fun game for youngsters who want to play around in this colorful world. The variety of activities ensures there is something new to see in every level, and though none of the missions are deep, they do offer plenty of simple fun. Control issues lead to a number of unavoidable deaths, but the forgiving checkpoint ensures that you won't have to backtrack much if you end up in a bottomless pit.
open_in_newRead full review

7.00
Patrick Elliot—Oct 13, 2010
The overall package however is still a lot of fun, and even though the story mode doesn't really do anything new, the familiar platforming and shooting are done well. Even after the short story mode is over though, players can turn to Toy Box mode to extend the life of their game, taking on missions, buying new toys and customising the world to their liking.
open_in_newRead full review
See all critic reviewsarrow_forward