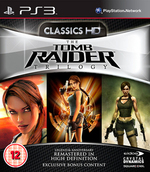 3D Juegos open_in_new
8 Ratings
8.30
This game has not been reviewed. Be the first to review it!

7.50
Ryan Clements—Mar 28, 2011
Tomb Raider Trilogy is a handy collection of three recent Tomb Raider games, two of which have been given a graphical boost and take advantage of the PS3's capabilities. Tomb Raider Anniversary and Tomb Raider Underworld are both fun games and combine immensely enjoyable platforming and some neat puzzles with mediocre combat. But Tomb Raider Legend just doesn't hold up. I'd even recommend skipping it, though you do miss out on a few cool scenes if you jump straight into Anniversary.
open_in_newRead full review

7.00
Jeff Belote—Apr 08, 2011
The story in all three games, while similar, is excellent and the graphical overhaul makes these older titles look new. The only real downside are the controls and combat system, which feel dated. This is the very best collection available for Tomb Raider fans, or for anyone who wants to learn about Lara Croft and the series.
open_in_newRead full review

7.00
Jim Sterling—Apr 04, 2011
What makes this difficult to review is that the collection is actually quite good, despite my finding it difficult to recommend. All three titles are at the very least playable and plenty capable of providing fun now and again. Not to mention, the graphical upgrades are very pleasant indeed, and there are a number of silly-but-welcome extras thrown in, including a PS3 theme and Home avatar clothing. For a fan, there's a lot going for the collection, except for the inherent pointlessness of owning Underworld a second time.
open_in_newRead full review
See all critic reviewsarrow_forward