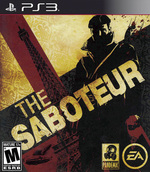 Welcome to Nazi-occupied Paris, a unique open world where you are The Saboteur. Play as Sean Devlin, a street-tough Irish racing mechanic seeking personal redemption on a Nazi officer that has taken everything away from him. Now it’s time for payback - with the help of the French Resistance. With British intelligence, an arsenal of weaponry, and your own street smarts and brawn, you must exact revenge on those who tried to destroy your life. Armed with superior skills and with little left to live for, you'll sabotage, blow up zeppelins, derail trains, implode bridges, destroy armored tanks, and level enemy facilities in the name of vengeance.

3D Juegos open_in_new
33 Ratings
8.40
This game has not been reviewed. Be the first to review it!

8.00
Matt Bertz—Dec 03, 2009
I can’t decide which I like better – the stylish black and white treatment of Paris under German occupation or the colorful world it becomes once you liberate a neighborhood. French Resistance? More like International Resistance – this game has enough foreign accents to rival BBC World News. A great 1940s jazz soundtrack accompanies your street carnage. While the driving, shooting, and climbing get the job done, they lack the polish of superior experiences. The Saboteur may lack the polish of the contemporaries it boldly mimics, but protagonist Sean Devlin’s quest for revenge and an alluring 1940s Paris make this a World War II memory worth making.
open_in_newRead full review

7.50
Tom Mc Shea—Dec 04, 2009
The action in The Saboteur is well executed and rewarding, so even though World War II is merely a backdrop and the stealth elements are underdeveloped, it's still a blast to spill gallons of Nazi blood and blow targets sky-high. The Saboteur may not be the most original sandbox game around, but it certainly stands out from the glut of other World War II-themed adventures, and it's a darn good time as long as you can put up with its minor problems.
open_in_newRead full review

7.50
David Clayman—Dec 08, 2009
On paper, The Saboteur is a winner. The plot is intriguing and the conversation is snappy. And if you tire of following the particulars of "La Resistance" there are always some nicely rendered nude women to ogle. But boil it down to the gameplay and you're left with a good chunk of clumsy third-person shooting with bits of awkward driving. The Saboteur borrows plenty of great elements from other games, but doesn't execute on them as successfully.
open_in_newRead full review
See all critic reviewsarrow_forward