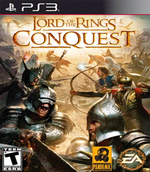 The Lord of the Rings: Conquest puts players into the thick of the tremendous battle over The One Ring, playing out battles from both sides of the confrontation! Conquest will let players take control of many of the characters and creatures from the series and pit them on any of the franchise's famous battlefields. From Cave-trolls to Oliphaunts to the Balrog and even Sauron, practically the entire universe will be available for battle with up to 150 characters on-screen at any one time. Up to 16 players will be able to clash online, with four players able to play cooperatively through the main campaign either online or via four-player split-screen

3D Juegos open_in_new
48 Ratings
7.10
This game has not been reviewed. Be the first to review it!

6.00
Neon Kelly—Jan 16, 2009
Most of these flaws actually tend to be quite amusing, but they still don't help what is ultimately a fairly limited experience. There is certainly lots of fun to be had with LOTR: Conquest, but unfortunately it's not really the kind of fun that lasts over a long period of time.
open_in_newRead full review

7.20
Jonathan Marx—Jan 13, 2009
In the end, it seems like The Lord of the Rings IP is showing signs of age. At least that seems to be the case for the long line of action titles in the EA stable. Outside of the excellent split-screen and online multiplayer experience, Conquest doesn't substantially distinguish itself from games in the franchise released five years ago, and this holds the overall experience back.
open_in_newRead full review

6.50
Chris Watters—Jan 14, 2009
Nevertheless, these pitfalls are somewhat compensated for by two epic campaigns that draw you into a rich world in new and exciting ways. Fans of this world will get the most out of The Lord of the Rings: Conquest, but gamers who are looking to battle in an epic setting and willing to weather some frustrating elements will find plenty of excitement on this journey through Middle-earth.
open_in_newRead full review
See all critic reviewsarrow_forward