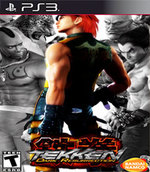 Dark Resurrection features over 30 characters, including Dragonuv and Lili, the two new characters that were added for the Dark Resurrection arcade update. Also making the trip over from the arcade are new stages, themselves based off the original Tekken 5 stages, but with climate and time effects as well as new background objects, totalling 19 stages. The PS3 version features full 1080p visuals and the playable debut of boss character Jinpachi. The various modes found in the arcade game, including arcade battle, ghost battle and gallery have been included and updated for the PS3 version.

Game Faqs open_in_new
423 Ratings
7.98
This game has not been reviewed. Be the first to review it!

9.00
Justin Cheng—Mar 02, 2007
Dark Resurrection doesn't have all of the extra features you might expect from a console release of a Tekken game, but this is offset by the pretty fair price and the fact that you can finally play the game on any size TV screen you have and with an arcade stick (like, say, the Hori Fighting Stick 3), to boot. Now that's not a bad deal at all.
open_in_newRead full review

8.30
Jeff Gerstmann—Mar 01, 2007
Here's a game that might not be the newest game in town, but by clocking in at a budget price and not coming on a Blu-ray disc, it stands out and delivers on the potential of this sort of game-delivery platform. But forget all that nonsense. The bottom line is that Dark Resurrection is a fantastic fighting game, and it's especially sweet if you have one or more Tekken players nearby that'll get into the versus mode with you.
open_in_newRead full review

8.00
Wesley Yin-Poole—Apr 05, 2007
I reckon you'll be interested in DR on PS3 if you're a long-time fan of the series and need a fix to tide you over till Tekken 6, or a proud owner of a spanking new PS3 and fancy an accessible and great value beat-em-up with which you can have a laugh with some mates. A great start for new PS3 owners and a great start for PS3's downloadable game's service.
open_in_newRead full review
See all critic reviewsarrow_forward