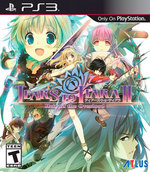 Tears to Tiara II: Heir of the Overlord

You are the last heir to Hispania’s royal throne.  Will you succeed in reclaiming your land from the tyranny of the Divine Empire? The province of Hispania suffers under the cruel dominance of the Divine Empire, but there is a rebellion coming. Hamilcar Barca, sole surviving member of Hispania’s royal family, has within him a unique rage and a terrifying power that may be the key to freeing his people at last—if he can first learn to control the demon inside, lest he himself turn the world to ash. Joining Hamilcar are 14 other main characters, powerful beasts, and even gods that will help aid in his fight for justice. Tears to Tiara II: Heir of the Overlord is an intense strategy RPG combined with visual novel-like storytelling from developer Aquaplus.

Playstation Store open_in_new
123 Ratings
9.34
This game has not been reviewed. Be the first to review it!

7.00
William Schwartz—Oct 15, 2014
Tears To Tiara II: Heir Of The Overlord is not a bad game by any means but it does take a lot to get going. If you manage to stick past the very long and seemingly overtly drawn out first chapter you will be rewarded with a fun battle system that makes many interesting choices to add a fresh feel to what is usually a very basic genre full of dated mechanics. Thankfully, the music, the art and the battles will be enjoyable for fans of the genre.
open_in_newRead full review

7.00
Bradly Hale—Oct 16, 2014
Tears to Tiara II: Heir of the Overlord is a more than competent SRPG. Its combat is tactically-sound, though not unnecessarily complex to the point of being inaccessible. ...This, coupled with the incessant need for grinding between battles, makes Heir of the Overlord a JRPG that simply doesn’t respect its player’s time. Should that not matter to you, there’s plenty to like here. Just know it’s going to take a while to see it all.
open_in_newRead full review

8.00
Jae Lee—Oct 15, 2014
Between the chibi character models to the muddy, uninteresting battlefield, this game looks like it’s straight out of the PS2 era. At the end of the day I was pleasantly surprised by this little gem of an SRPG, and while the poor graphics and pacing holds it back from true greatness, it certainly has the heart of what could be a cult classic.
open_in_newRead full review
See all critic reviewsarrow_forward