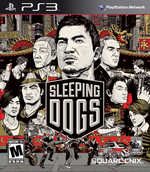 Inspired by classic Hollywood and Asian cinema style action thrillers, Sleeping Dogs is a gritty open-world cop drama set in the vibrant city of Hong Kong. Sleeping Dogs catapults players into the role of undercover cop Wei Shen, tasked with taking down one of the world’s most fearsome criminal organizations from the inside... the Hong Kong Triads. As players explore the bustling and crowded Hong Kong island, through its neon-lit side streets and sprawling street markets, an incredible story unfolds of loyalty and betrayal where Wei begins to question his own motives as he is sucked in deeper than he could ever imagine.

4gamer.net
1 Rating
8.50
This game has not been reviewed. Be the first to review it!

9.00
Anthony Severino—Aug 14, 2012
The story of loyalty and inner turmoil is told through well-scripted dialog and expert voice acting during cutscenes. Combat, gunplay, and driving are each equally satisfying, well-balanced, and plenty. The living, breathing underworld of Hong Kong is expertly recreated. The sum of all of these parts give Sleeping Dogs that classic Hong Kong Kung Fu action flick vibe, putting you in the director’s chair
open_in_newRead full review

8.80
Richard Walker—Aug 14, 2012
It's hard to believe that this almost got canned. United Front Games has crafted a stunning open-world action romp that draws on a variety of cinematic influences to startling effect. Sleeping Dogs is by no means perfect, but at times, it comes painfully close.
open_in_newRead full review

8.50
Colin Moriarty—Aug 14, 2012
Sleeping Dogs did things that wowed me from the moment I started playing, and it never really stopped. A few finicky issues aside, Sleeping Dogs has proven itself worthy of joining the top class of open-world sandbox games revolutionized by the likes of Grand Theft Auto IV and currently topped by more recent additions like Saints Row: The Third
open_in_newRead full review
See all critic reviewsarrow_forward