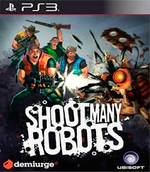 Shoot Many Robots follows P. Walter Tugnut on his mission to kill as many robots as possible after a factory begins to ominously produce killer robots. With an RV full of guns and beer, gamers will experience a four-player co-op run-n-gun side-scrolling RPG shooter filled with tons of weapon and item customization. Shoot Many Robots will also feature two game modes: Traversal, where players must progress linearly through a level, and Survival, where players fight against waves of robot hordes, delivering hours of robotic carnage and fun.

Gamestop
2 Ratings
10.0
This game has not been reviewed. Be the first to review it!

7.00
Kris Lipscombe—Mar 13, 2012
Shoot Many Robots might not be the most deep or meaningful game out there, but it is a lot of fun. Whilst it’s not without its faults, in particular the checkpoint placement is a real irritation, the action packed nature and general ridiculous feel you get from the game will keep you amused throughout.
open_in_newRead full review

7.00
Arthur Gies—Mar 13, 2012
Shoot Many Robots doesn't try to be everything. It aims to be an arcade co-op shooter with hooks, and those hooks are sharp as hell thanks to some clever writing and thoughtful, diabolical loot design. That narrow ambition pays off in a game that might sound like a side-scrolling Borderlands clone on paper, but stakes out territory all its own in practice. If you can get some friends together, Shoot Many Robots is a perfect way to spend a weekend or two, traipsing through robot corpses in your prettiest propeller beanie and tutu.
open_in_newRead full review

8.60
Ippon—Mar 13, 2012
Despite its humour, the action is fast paced enough that you have to take it seriously if you want to survive. Some levels can be a little challenging, especially if you made the wrong weapon of choice. Multiplayer mode also enables a mix of co-operation and competition as you strive to get more nuts than the other guy, which makes the action more chaotic and frantic.
open_in_newRead full review
See all critic reviewsarrow_forward