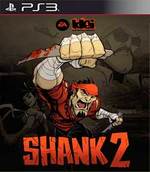 The avenging assassin Shank returns in this violent, action-packed sequel. With those closest to ex-mob hit man Shank under attack, Shank is once again forced on the offensive. Now he must put to use his trusty arsenal of dual handguns, chainsaws, machetes, plus all-new weapons and a brand new set of moves to protect those close to him. Shank 2 expands on the original game's amazing visuals and combat system to redefine the 2D side-scrolling brawler.

3D Juegos open_in_new
2 Ratings
8.20
This game has not been reviewed. Be the first to review it!

8.00
Game Trailers—Feb 09, 2012
You’ll likely plow through the single player campaign in roughly two hours or so, but you can get quite a bit more out of it if you choose to seek out the extras, like hidden intelligence files and bonus costumes. Overall, Shank 2 is a significant improvement over its predecessor, and one that proves there are still a few developers out there willing to learn from their mistakes.

7.00
Vivas Kaul—Feb 13, 2012
Overall, Shank 2 is an impressive package, but there are two complaints which players could levy against the game. First, the campaign is very short with each level taking around 20-30 minutes to complete, and even that timing is perhaps generous for some of the earlier levels. Second, the lack of any co-op campaign element is a bit of a letdown, especially considering that it has been replaced with what would appear to be a limited Survival Mode.
open_in_newRead full review

8.00
Peter Chapman—Feb 15, 2012
On the whole, Shank 2 takes the best bits of the first game and builds on them. It might not last much longer than a few hours to run through but leader boards and the Survival mode should offer some replay potential and at a budget price, it’s well worth blasting through — if you can handle the action.
open_in_newRead full review
See all critic reviewsarrow_forward