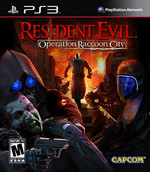 It is September 1998 and the action centers once more on the ill-fated Raccoon City and the horrific consequences of the deadly T-virus outbreak from the Umbrella facility. With a cover up required, Umbrella orders an elite team into Raccoon City to destroy all evidence of the outbreak and eliminate any survivors. Hearing of this plan, the US Government dispatches its own special forces to uncover any evidence that exposes the cause of the viral infection and Umbrella's actions. Players take on the role of an Umbrella Security Services soldier (U.S.S.), competing alone or in four player co-op in a battle against all the competing forces at play in Raccoon City.

3D Juegos open_in_new
157 Ratings
6.80
This game has not been reviewed. Be the first to review it!

5.00
Mike Mason—Mar 21, 2012
Resident Evil: Operation Raccoon City isn't worth your time. Single player is infected with poor artificial intelligence, lack of useful feedback and abusive enemies. Rope in a couple of friends — or open your game up for anybody to join — and ORC improves, still beholden to many of its problems but better for the replacement of its inadequate AI with human players to help deal with its viruses. The versus multiplayer modes are the highlight, though they do nothing outstanding – they're mainly Resident Evil-themed versions of game types found in any number of shooters already out there.
open_in_newRead full review

6.00
Dan Lee—Mar 20, 2012
Resident Evil: Operation Raccoon City is by no means a bad game. The chance to face off against Resident Evil favourites such as Nemesis is a really interesting idea, and the constant threat of zombies will always have you on edge. Saying that, I can see the multiplayer modes becoming repetitive fairly quickly. Whilst differing slightly, the modes on offer are too similar, and all play out on the same handful of maps.
open_in_newRead full review

3.50
Steven Williamson—Mar 30, 2012
Overall, Resident Evil: Operation Raccoon City feels like it needed another couple of years in development to flesh out the story, improve the production, slicken-up the gameplay, iron out the glitches and inject it with some much-needed pizazz. Four-player co-op and the multiplayer modes may give shooter fans some fun along the way, but we suspect that it may well be some time before we see Resident Evil in this particular guise again.
open_in_newRead full review
See all critic reviewsarrow_forward