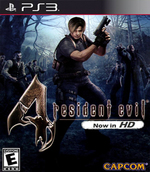 3D Juegos open_in_new
35 Ratings
8.90
This game has not been reviewed. Be the first to review it!

9.00
Tom Orry—Sep 19, 2011
When I began replaying Resident Evil 4 HD for this review I thought I'd enjoy it again, but I'd clearly forgotten a lot of the really cool bits. While the opening chapter proved to be a lesson in re-learning how to play, once it all clicked again it became apparent just how much I love Capcom's highly-celebrated game. For me it's easily the best Resident Evil title, and an absolute must-buy for anyone interested in action or horror. Resident Evil 4 remains one of the greats.
open_in_newRead full review

8.30
Game Trailers—Sep 20, 2011
Aside from trophy support and online leaderboards, no new features were added. There's no Move support, for instance, which is curious considering it's already been re-released for the Wii. Unless you absolutely need to have a moderate-looking HD version, you'd be better off with the Wii iteration because it includes multiple control setups and all the same extra features.

9.00
Michael Harradence—Sep 21, 2011
Sure, there are a few flaws dotted throughout, and the HD revamp isn’t quite as polished as it should have been, but these issues are pretty inconsequential in the long run. At the end of the day, what you’ve got here is unequivocally one of the greatest action-horror outings of all time, and an absolute must-have for Resi fans and newcomers alike.
open_in_newRead full review
See all critic reviewsarrow_forward