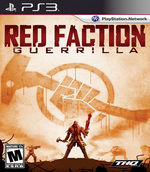 Set 50 years after the climactic events of the original Red Faction, Red Faction: Guerrilla is a third-person shooter that allows players to take the role of an insurgent fighter with the newly reestablished Red Faction guerilla movement on Mars as they battle for liberation from the oppressive Earth Defense Force. Red Faction: Guerrilla redefines the limits of destruction-based gameplay with a huge open-world, fast-paced guerilla-style combat, 16-player online multiplayer and true physics-based destruction.

Gamestop
6 Ratings
6.50
This game has not been reviewed. Be the first to review it!

8.00
Jeff Gerstmann—Jun 09, 2009
While there are clunky bits at the fringes of Red Faction: Guerrilla that give it a handful of frustrating or disappointing moments, the core moments of the game are exciting and well-conceived. Factor in a thrilling multiplayer component and the sheer satisfaction provided by the wholesale destruction of huge structures and you've got more than enough reasons to get your ass to Mars.
open_in_newRead full review

9.00
Tom Orry—Jun 02, 2009
Had Red Faction Guerrilla's campaign been at a consistent high throughout we might have had a real game of the year contender on our hands. Even with some flaws, though, Guerrilla is a great game that comes highly recommended, in no small part to some superb multiplayer game modes that should see the game gain quite a following. More importantly, blowing things up is cool, and no game lets you see the destruction caused better than Volition's latest.
open_in_newRead full review

8.00
Charles Onyett—May 28, 2009
What's more disappointing about Volition's effort is the rocky mission design, bland artistic style, weak plot and anemic character development, which shifts too much focus to the element of destruction to maintain a level of excitement. Its enjoyable gunplay mechanics along with the weapons and opportunity for tearing apart structures carry over into the online space, where Volition has built an impressive multiplayer suite that includes stat tracking, unlocks, and a number of game modes that focus on flattening buildings. While the game may not do everything right, it's your best bet for free-form demolition and unpretentious entertainment.
open_in_newRead full review
See all critic reviewsarrow_forward