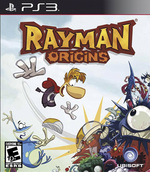 Rayman Origins is playable with up to four local players who may drop in or out at any time. Players can choose to control either Rayman, Globox or two Teensies, with additional costumes available as the game progresses. Players travel through each level, fighting enemies and rescuing imprisoned Electoons. As the game progresses, players gain new abilities such as running up walls, gliding in midair, swimming and shrinking in size to reach new areas. Certain segments also sees players riding a mosquito, where players can shoot enemies or suck them up and fire them. If a character is hit by an enemy or obstacle, he will inflate into a ballooned state until another player can bring him back into the game by slapping him, similar to New Super Mario Bros. Wii, although players can collect hearts that will protect them from one hit.

XGN open_in_new
15 Ratings
9.01
This game has not been reviewed. Be the first to review it!

8.00
Neon Kelly—Nov 10, 2011
There's probably a hardcore cadre of Rayman fans who'll be left spitting feathers after that last paragraph; if you're one of these people, you'll worship this game, and will likely appreciate the dozens of unlockable characters - most of whom look exactly the same to my untrained eye. But even for the rest of us, Rayman Origins has an awful lot to give: it's a passionate tribute to the days when platform games ruled the Earth, but beyond that, it's also one of the best examples of the genre we've had in recent memory.
open_in_newRead full review

8.50
Jeff Cork—Nov 10, 2011
One of the things that I appreciate about Rayman Origins is how it constantly shovels new things at the player. Whether it’s a new ability, new gameplay styles, an unlockable character, or another breathtaking level to discover, Rayman doesn’t stick to the same old path too long. And even when Rayman delves into themes and areas that seem to be mandatory for platform games in general, Ubisoft puts enough of a twist on the norm to make it seem fresh again.
open_in_newRead full review

9.50
Brian Altano—Nov 09, 2011
In a blockbuster holiday season of M-rated war games, it’s refreshing to see something so different and special as Rayman Origins. It’s downright gorgeous and a total blast to play alone or with friends. A truly realized vision at the top of its genre, Rayman Origins is an extravaganza with plenty of action to keep it fresh from start to finish and beyond.
open_in_newRead full review
See all critic reviewsarrow_forward