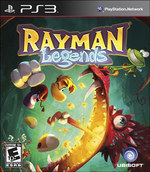 Gamestop open_in_new
14 Ratings
8.80
This game has not been reviewed. Be the first to review it!

9.00
Greg Giddens—Sep 03, 2013
Rayman Legends winds up with a fistful of content and scores a knock-out blow with its impressive visuals, infectious audio, and exceptional controls. Some of the Wii U features may struggle to translate, but this game still more than lives up to its name, and is destined for a place among the platforming elite. Chaotic with friends and addictive alone, this will leave you intoxicated by its charm, and with so much to do, it won't outstay its welcome anytime soon.
open_in_newRead full review

9.00
Tom Mc Shea—Aug 30, 2013
Rayman Legends is an excellent game in just about every way. However, there is one problem. When a female character dies, you're treated to a creepy panty shot that's totally out of place. But that's the one negative mark this game bears. Fueled by smooth platforming, striking visuals, wacky situations, and infectious beats, Rayman Legends is a nifty platformer that exudes unabashed delight.
open_in_newRead full review
See all critic reviewsarrow_forward