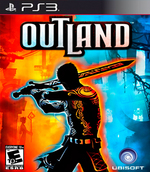 An action platformer with a combat/interactivity system based on polarity, Outland focuses on a hero who can switch between light and dark forms, an ability he'll need to exploit in order to destroy monsters and avoid attacks. He'll take damage from opposite-colored bullets but will be impervious to those of the same polarity. He'll also only be able to control objects that match his polarity. By switching between forms, he will be able to solve platforming puzzles and crush enemies in this mysterious new land he finds himself in.

3D Juegos open_in_new
6 Ratings
8.30
This game has not been reviewed. Be the first to review it!

8.00
Brad Shoemaker—May 04, 2011
I have no reservation calling Outland an absolutely beautiful game. Housemarque does a lot with a little here, employing a silhouetted art style similar to Limbo but with Tron-like red, blue, and yellow highlights applied to the characters in mostly tribal patterns that make them stand out and help highlight the tremendous animation.
open_in_newRead full review

9.00
Tom Mc Shea—Jun 22, 2011
Outland is a meticulously crafted game in which every element is used to further the overall experience. It's one thing to get huge ideas right--such as boss fights and visual design--but the brilliance of Outland goes much deeper than that. This is a game that truly understands what makes a platformer great, and it adds enough unique elements to separate it from its peers. From the pacing and difficulty curve to the controls and combat, everything comes together to form an amazing, unified adventure.
open_in_newRead full review

9.00
NATHAN MEUNIER—May 09, 2011
When you get right down to it, Outland cannibalizes a lot of tried-and-true gaming elements and turns them into something entirely new and exciting. The magical realm you explore is visually captivating, overflowing with elegance and mystery. More importantly, it serves up some damn good gaming.
open_in_newRead full review
See all critic reviewsarrow_forward