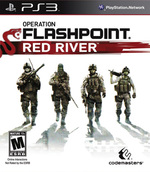 Delivering an authentic and intensely personal US Marine Corps infantryman experience, Operation Flashpoint: Red River offers an epic campaign played out on a deadly new battlefield set in the remote yet beautiful country of Tajikistan along the Vakhsh River.

Red River depicts a fictional conflict with contemporary geopolitical themes, unfolding over three distinct acts in both single player and drop-in-drop-out co-operative play for up to four players online. Faced with new counter-insurgency combat and the returning threat of the Chinese PLA, players will feel the tension, brutality and carnage of modern conflict from the perspective of a marine fireteam on deployment in a hostile country.

3D Juegos
7 Ratings
8.20
This game has not been reviewed. Be the first to review it!

6.00
Eric Neigher—Jun 24, 2012
Red River may not appeal to everyone – our sense is that it’s too hardcore for the console crowd and doesn’t have enough of a unique identity for the PC crowd – but that shouldn’t dissuade fans of the series or of modern-warfare shooters from taking a playthrough. If nothing else, it’ll whet your appetite for the slew of AAA military shooters coming soon to a TV/monitor near you.
Read full review

6.50
Joseph Barron—May 04, 2011
Operation Flashpoint: Red River is a good first-person shooter with solid shooting mechanics and great emphasis on a tactical approach to the battlefield. However, the single-player campaign is hampered by poor AI that turns challenging missions into frustrating ones, and lackluster graphics sometimes erode the game's realism.
Read full review

7.00
Martin Gaston—Apr 27, 2011
It's a real shame that Codemasters hasn't created a more involving set of missions with Red River, its campaign sagging at both ends of its entertaining middle, and while their attempt at streamlining the experience lessens the series' frustrations, the core game will still prove too delicate for many players. Operation Flashpoint: Red River does a good job of capturing the spirit of war, but it sadly fails to capitalise on its lofty ambitious.
Read full review
See all critic reviews