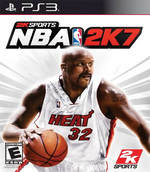 Voted best current and next-generation NBA hoops franchise by both press and gamers, NBA 2K7 continues its legacy of dominance this year on the hard court with incredible graphics, tight control and a revolutionary shooting game. Every player's play style has been captured for the first time in a simulation for a look and feel that plays as individually as the athlete. And the revolutionary Shot Stick Pro is back with more intuitive shooting touch, control and finesse than ever. Plus, the 24/7: Next feature allows you to play your way through street mode with a fully developed storyline where you can prove you belong with the NBA's elite.

3D Juegos open_in_new
1 Rating
8.30
This game has not been reviewed. Be the first to review it!

8.50
Jeff Haynes—Nov 17, 2006
NBA 2K7 is still the best basketball game out there, and it's improved thanks to the SIXAXIS controller, turning an already impressive title into a great one. By forcing you to use the controller instead of the analog stick for free throws, NBA 2K7 manages to make the SIXAXIS both a gimmick and a contribution to the gameplay. It's a gimmick that's contained to only a few situations during play, but it's a contribution because it's easy to learn, yet challenging to pull off. It also helps give you a better sense of the shot stick timing, which will definitely make you a better player in the long run.
open_in_newRead full review

8.80
Game Trailers—Dec 01, 2006
The gameplay in NBA 2K7 is just as strong as the list of options on offer. There are still a few hangovers from prior installments in the series, but a lot of them have been cleared up as well--making for the most realistic-playing game of basketball on the market. While it isn’t perfect, NBA 2K7 simply offers the most well-rounded, entertaining, and error-free hoops offering this season. Plenty of modes and gameplay depth combine with stunning visuals and presentation to make NBA 2K7 this year’s king of the court and a must own for PS3-owning hoops fans.

8.00
Rich Grisham—Jun 24, 2012
The newest hardwood hoops sim from 2K Sports is simply the sweetest looking and sounding b-ball game we've ever played, the kind that makes people stop what they're doing and watch in wonder when it's on the screen (assuming, that is, you've finally dropped some cash on an HDTV). It may not be perfect, but any faults can be forgiven because, well, it's just so damn pretty you can't stay mad for long.
open_in_newRead full review
See all critic reviewsarrow_forward