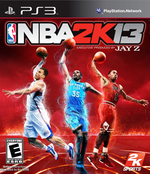 NBA 2K13 is a simulation basketball video game set in the National Basketball Association. The fourteenth release in the franchise history, it has been the most popular NBA video game in recent years, and is the first to feature multiple players on the cover - Kevin Durant of the Oklahoma City Thunder, Blake Griffin of the Los Angeles Clippers, and Derrick Rose of the Chicago Bulls. Additional features include: current and past NBA superstars, new mapping of player/character moves to the right analog controller stick positions, dynamic shot generation, signature skills, a revamped passing system, and more.

3D Juegos open_in_new
50 Ratings
9.10
This game has not been reviewed. Be the first to review it!

8.00
Aran Suddi—Nov 17, 2012
NBA 2K13 is a brilliantly fun basketball game and one for all basketball fans to pick up. Casual sports game fans should also pick this up as it’s good to play against others. Sure there are a few things 2K can improve, like the menu interface and the inclusion of a tutorial, but once you get a hang of it NBA 2K13 is a great experience.
open_in_newRead full review

8.90
Richard Walker—Oct 11, 2012
NBA 2K13 scores big once again, although it fails to offer little in the way of sweeping changes or innovations. It's still the undisputed daddy of basketball games, but we'd have liked to have seen more ideas being brought to the hardwood.
open_in_newRead full review

8.00
William Schwartz—Oct 03, 2012
They’ve addressed some noticeable issues that previous games have had, and refined the online experience from a connectivity standpoint. Additional modes give even more ways to play, and game systems like Virtual Currency are introduced competently. There’s no competition out there for fans of virtual basketball to compare NBA 2K13 to, but that’s because the team at 2K has a level 3 ankle breaker perk equipped that’s stopping them in their tracks.
open_in_newRead full review
See all critic reviewsarrow_forward