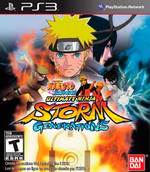 Based on the popular animated Naruto Shippuden series, Naruto Shippuden: Ultimate Ninja Storm Generations offer a vast selection of playable & support characters spanning every generation of the Naruto saga, alongside incredible online functionality to take the Naruto ninja fight onto the global stage in the much-beloved fighting series. The game powers the Ultimate Ninja series into the future by revolutionizing online play and ramping up the number of playable and support characters far beyond any Naruto game in the wildly popular franchise. Players will compete in a variety of online battle modes with their favorite Naruto characters, including Naruto and Sasuke. Naruto fans have been waiting to see more of Zabuza and Haku since the launch of the original Manga, and now they will have their chance!

Amazon open_in_new
65 Ratings
7.80
This game has not been reviewed. Be the first to review it!

7.25
Jeremy Ray—Apr 12, 2012
Full of fan service, this one is for the Naruto faithful. It’s competent and looks great, but if you’re just after a good fighter, you can do better. The fighting genre is experiencing somewhat of a second golden age of games right now and Generations isn’t quite one of them.
open_in_newRead full review

7.00
Maxwell McGee—Mar 19, 2012
Thanks to the tweaks to the substitution technique, the combat mechanics in Naruto Shippuden: Ultimate Ninja Storm Generations feel better than ever. But as a whole, this game is a minor refinement over the previous installments. Generations is still a solid fighter, but definitely leaves you wanting more variety in its modes.
open_in_newRead full review

7.00
Joseph Fait—Apr 02, 2012
While Generations is fun to play and stunning to look at, it feels like a leap back from Ninja Storm 2 in many ways. The in-engine cutscenes I loved so much from the previous games are entirely stripped out, replaced with dubbed over still images, and a small animated bit at the end of each character's story. Don’t get me wrong, the story of Naruto in and of itself is compelling, but the way it is handled in Generations is far from it.
open_in_newRead full review
See all critic reviewsarrow_forward