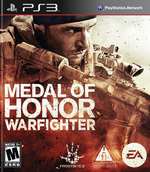 MEDAL OF HONOR™ WARFIGHTER is a First-Person Shooter featuring covert Tier 1 military operative combat. The game is a sequel to the 2010 release, Medal of Honor, which moved the long-running game series from its roots in WWII based gameplay, into modern warfare scenarios and true-to-life conflicts. The single-player campaign features mission play involving returning characters ''Mother,'' ''Preacher,'' ''Voodoo'' and others in operations after their service in Afghanistan. Multiplayer modes include 2-20 player support in which players have the ability to play as one of 13 real special ops units, from 10 countries.

XGN open_in_new
10 Ratings
8.78
This game has not been reviewed. Be the first to review it!

5.00
Matt Bertz—Oct 25, 2012
The uninspired single-player campaign, uneven multiplayer execution, and rampant presence of glitches undermine Medal of Honor: Warfighter’s efforts to join the Tier 1 of military shooters. If Danger Close keeps executing this poorly, this once-loved series may be dangerously close to being put in a casket.
open_in_newRead full review

4.00
Mitch Dyer—Oct 26, 2012
At its core, Warfighter is a functional shooter built on trite design ideas, but significant technical problems knock it below the realm of mediocrity. This isn’t just an upsetting sequel or me-too military shooter – Warfighter is disrespectful of your time and unwilling or unable to adapt to what’s been done better elsewhere.
open_in_newRead full review
See all critic reviewsarrow_forward