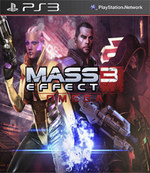 This game requires the base game Mass Effect 3 to play.

Omega has been seized by one of Cerberus' most accomplished and brilliant agents, General Oleg Petrovsky…and Aria T'Loak is plotting her revenge.  To reclaim her domain, she must team up with Commander Shepard. Join Omega’s infamous leader in her fight to retake the notorious black market station.  Navigate Omega’s seedy underbelly as Aria joins your squad and you witness her legendary biotic powers and unrelenting ruthlessness first-hand. Help Nyreen Kandros, the valiant turian leader of the Talon mercenary group, as she fights to free the enslaved people of Omega.

5.00
Bengt Lemne—Nov 30, 2012
I played through the expansion around four hours, someone who does less exploring will probably get it done in less - and while that is what we come to expect from this kind of expansion it still doesn't feel like good value at a tenner. Pick a random 4 hour stretch of the main game and you'll get an experience that is far better than what Omega offers, even if I like the idea of giving the player a pair of new squad mates and new enemies to contend with.
Read full review