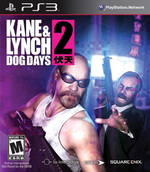 After a simple job goes wrong, Kane and Lynch find themselves wanted by the entire Shanghai underworld. Lynch is living the good life as a henchman in Shanghai, where he has settled down with his girlfriend. He's involved in a big arms deal but needs help to make it happen. Kane is a wanderer, an ex-mercenary with family problems who needs to get away. Despite their differences, Lynch calls him for help. Once together, they set-off a chain of events over two days, as the deal falls apart and Kane and Lynch face the consequences the hard way.

Gamestop
18 Ratings
7.20
This game has not been reviewed. Be the first to review it!

6.00
Andrew Reiner—Aug 17, 2010
If your preference is single-player or co-op, Dog Days’ lack of personality (both in the characters and on the battlefield) results in one of the blandest shooters out there. Given how little the story matters, Mickey Mouse and Donald Duck could have been swapped in as the protagonists and I probably wouldn’t have noticed. Corners are even cut on the ending, leaving the story wide open with no hint of resolution.
Read full review

6.80
Tony Capri—Aug 17, 2010
Though Dog Days wasn’t exactly what I was expecting, I enjoyed its arcade approach. Unfortunately, the design and breadth of content don’t come close to justifying the price. Had this been a $15 game folks could download from PSN or XBLA, it would be much easier to recommend.
Read full review

6.00
Jeff Gerstmann—Aug 17, 2010
Kane & Lynch 2's visual style really sets it apart in ways that its standard take-cover action can't. It'd be a really cool game that would actually be pretty easy to recommend if there were a little more to it.
Read full review
See all critic reviews