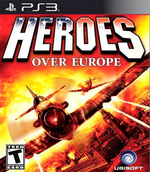 The sequel to the mighty World War II flight combat game Heroes of the Pacific, Heroes over Europe takes aspiring combat pilots into the bullet-ridden heart of major World War II European air battles in glorious, dogfight-friendly high definition. Heroes over Europe follows the Allied campaign from the attacks on London to the destruction of Berlin, with players under orders to strap themselves into the authentically rendered cockpits of the campaign’s iconic aircraft. Their mission: to survive the most intense dogfights ever seen in a flight combat game.

Gamestop open_in_new
9 Ratings
8.00
This game has not been reviewed. Be the first to review it!

5.00
Guy Cocker—Sep 30, 2009
Heroes Over Europe is an average World War II flight sim and one that has the misfortune of arriving just after IL-2 Sturmovik, which is a better game that offers a superior arcade experience as well as a hardcore simulation mode. If you like a flight sim where you can jump in a plane and start shooting, then you'll get some enjoyment out of the dogfighting. However, the repetitive gameplay, easy difficulty, and risible dialogue keep this game grounded.
open_in_newRead full review

6.00
Neon Kelly—Sep 30, 2009
While it's far from being a total disaster, it's hard to recommend Heroes Over Europe to anyone but the most ardent Spitfire fan.
open_in_newRead full review

7.20
NATHAN MEUNIER—Sep 15, 2009
Multiplayer modes are limited, though the dogfights and team battles for up to 16 players are still quite fun. It's satisfying taking down an enemy plane when you know there's a human cursing you out from his burning cockpit on the other end. But this doesn't negate the game's underlying issues. Had it been released a bit sooner, it might be worth recommending for a quick fix of airborne mayhem. Heroes Over Europe arguably has some high points but fails to outshine the competition.
open_in_newRead full review
See all critic reviewsarrow_forward