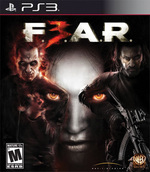 Nine months ago, Point Man and his F.E.A.R. squad were tapped to stop a telepathically gifted cannibal who had begun a murderous rampage. Point Man learned the target was his brother, Paxton Fettel, working alongside their tortured and psychically powerful mother, Alma Wade. Despite this revelation, Point Man followed orders to destroy them and subsequently ravaged the surrounding city and most of his F.E.A.R. team. Now, it is clear that Alma’s psychic influence survived— and worse, she is about to birth something that could destroy the world.

Fettel has returned from death with an unclear agenda, refusing to leave Point Man's side and asking for help to reach Alma. The remaining F.E.A.R. squad is still trying to complete their mission. With his chain of command broken and Point Man calling his own shots, where will his allegiance lie?

3D Juegos
20 Ratings
6.90
This game has not been reviewed. Be the first to review it!

7.80
Josh Wirtanen—Jun 21, 2011
F.E.A.R. 3 is a welcome treat, if only for its nerve-grinding atmosphere. The campaign is far too short—with Fettel, you could probably whiz through it in three or four hours—but the multiplayer modes are a lot of fun. The few other flaws the game has are largely forgivable, especially if you thirst for a great horror first-person shooter that you can play with a friend.
Read full review

7.00
Jamin Smith—Jun 29, 2011
Ultimately, FEAR 3 is another game that'll get lost in 2011 for being a bit forgettable. Maybe if it inspired loss of bladder control in the same way the original did - or, better still, how Monolith's Condemned did - it might have been slightly more memorable. FEAR 3 is sadly lacking in the fear department, and has subsequently lost its defining characteristic.
Read full review

7.50
Carolyn Petit—Jun 22, 2011
In the end, F.E.A.R. 3's campaign doesn't quite excel. There are few surprises or standout moments, and those who remember the relentlessly creepy atmosphere and edge-of-your-seat scares of the original F.E.A.R. may lament the fact that this game feels like a military shooter with light horror elements. But although F.E.A.R. 3 won't terrify you or leave you gasping for more, it's a solid shooter that satisfies from start to finish.
Read full review
See all critic reviews