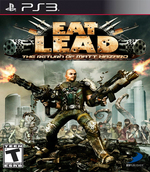 In Eat Lead: The Return of Matt Hazard, videogame action hero Matt Hazard gets his chance to prove once and for all that he is the king of shooters when the new owner of mega game publisher, Marathon Megasoft, gives Matt his comeback role starring in a new title for next-gen consoles that pits him against all of his memorable foes from videogames past. In the world of Eat Lead, however, everything stops being a game and becomes reality when it is clear that someone is using the new game to bring about Matt’s death once and for all.

3D Juegos open_in_new
7 Ratings
5.00
This game has not been reviewed. Be the first to review it!

5.20
GREG MILLER—Mar 02, 2009
The story isn't there, the gameplay is tedious, and there's nothing visually exciting about this one. There are a few laughs here and there and some Trophy padding, but this has "bargain bin" written all over it.
open_in_newRead full review

4.80
Jonathan Marx—Feb 26, 2009
Unfortunately, the satire and humor isn't enough to save the title from its contrived gameplay. If you are a true gaming buff who's interested in seeing the action-shooter genre get lampooned, Eat Lead is likely worth a rental. That being said, the painful mechanics will try their best to thwart your advance.
open_in_newRead full review

4.00
Jeff Gerstmann—Mar 12, 2009
Humor is entirely subjective, and maybe some of the stuff I found to be a little easy and dull will get you going. However, I'm a lot more certain about the quality of Matt Hazard's gameplay, which almost feels like it's going out of its way to be mediocre at best. Hey, maybe that's part of the joke!
open_in_newRead full review
See all critic reviewsarrow_forward

Transformers: Revenge of the Fallen