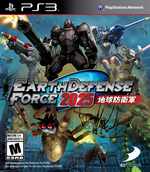 Eight years ago, a league of hardcore, gun-slinging heroes recovered humanity from the brink of extinction. But if you thought humankind could once again sleep soundly, you were deeply mistaken. Yes, the Ravagers were dispelled from the Earth's surface, but far beneath our cities and streets, a new breed of threat was evolving. And it's about to be unleashed. Giant insects and aliens are invading the planet again, but this time, from deep within its own core. An evolved enemy demands evolved heroes.

Amazon open_in_new
56 Ratings
7.80
This game has not been reviewed. Be the first to review it!

9.00
James—Feb 26, 2014
Earth Defense Force 2025 is a fantastic example of everything that makes pure action gaming so much fun, packed with replay value and over the top set pieces, and a more than worthy sequel that tops its predecessor in every way. Seeing as EDF 2017 is one of the best 3D action shooters ever, that’s a pretty impressive accomplishment.
open_in_newRead full review

6.00
John VanderSchuit—Feb 28, 2014
If you’re willing to brave the wonky controls, bland looks, repetitive sounds and wholly uninspiring story, there’s a content-rich base-level appeal to Earth Defense Force 2025 that will draw you in. With upcoming DLC, there’s missions, weapons, and co-op to keep you entertained for a long, long time. EDF gets the basics right. Yet I cannot shake the feeling that the game could have used far more TLC from a developer that has already been around the block.
open_in_newRead full review