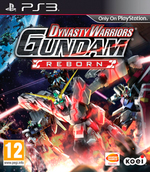 Jeuxvideo.com open_in_new
6 Ratings
7.50
This game has not been reviewed. Be the first to review it!

7.00
Jared Petty—Jul 10, 2014
Dynasty Warriors: Gundam Reborn is a fast and fun brawler with enough loot-crafting and variety between modes to keep things from getting too stale too quick. Played in short bursts, it’s an amusing arcade-style distraction incorporating a long-term reward system that keeps me coming back.
open_in_newRead full review

6.00
Anthony LaBella—Jul 09, 2014
Nothing about Dynasty Warriors: Gundam Reborn truly stands out, but developer Omega Force knows its audience and focuses on a specific design approach that works. The combat does little to deviate itself from past entries, but decimating thousands of enemies in mere minutes still provides some level of fun. Fans of Gundam will surely love the inclusion of six different series, and the number of mobile suits and upgrades gives some incentive to keep playing.
open_in_newRead full review

7.50
Brittany Vincent—Jul 09, 2014
It is possible that non-Gundam fans could enjoy this game on the merits of “beating up the bad guy robots” alone, but they’d end up missing out on the charm of what makes Gundam special. I can only hope with the new generation of gaming consoles we'll continue to see titles like this that are worthy of the legacy of the original IP.
open_in_newRead full review
See all critic reviewsarrow_forward