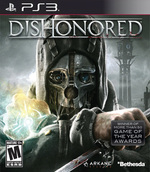 Dishonored is set in Dunwall, an industrial whaling city where strange technology and otherworldly mysticism coexist in the shadows. You are the once-trusted bodyguard of the beloved Empress. Framed for her murder, you become an infamous assassin, known only by the disturbing mask that has become your calling card. In a time of uncertainty, when the city is being besieged by plague and ruled by an oppressive government armed with neo-industrial technologies, dark forces conspire to bestow upon you abilities beyond those of any common man – but at what cost?

XGN open_in_new
4 Ratings
6.90
This game has not been reviewed. Be the first to review it!

8.00
Patrick Klepek—Oct 07, 2012
Dishonored is an excellent game, and one worthy of your attention. Dishonored’s greatest contribution to the genre games like Deus Ex helped establish will be best appreciated by those who’ve been with it from the start, but Arkane has made a game rooted in manipulating artificial intelligence that plays just as well to the guy or gal who wants to shoot stuff. That’s impressive.
open_in_newRead full review

10.0
William Schwartz—Oct 08, 2012
Dishonored is refreshing, thoughtful, measured, and unique. It’s a reason for gamers to keep supporting developers that are willing to go out and try new things, to tell stories that haven’t been told a thousand times before, even if that is through unconventional mechanisms. We’ll mourn the day when single player games officially die, but when/if they do, it’s games like Dishonored we’ll miss the most.
open_in_newRead full review

9.20
Cam Shea—Oct 07, 2012
Each mission is built as an elaborate network of choices for players to explore, and the same can be said for Corvo himself. Each player's selection of powers, perks and other upgrades will inform how they see and interact with this world, and no two play-throughs will be exactly the same. Dishonored is a game you'll talk with your friends about, and that you'll want to play multiple times. In this game there are always other paths to be taken and other challenges to conquer, and that's a refreshing thing indeed.
open_in_newRead full review
See all critic reviewsarrow_forward