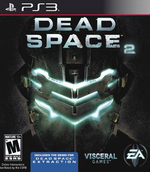 Dead Space 2 is a third-person horror survival game in which players must battle an alien infestation straight out of a nightmare. Follow-up game to 2008's original Dead Space, in this new release players explore a whole new terrifying game environment and battle the Necromorph abominations utilizing new weapons and tools such as the powerful javelin gun and a new space suit with built-in booster rockets. Additional game features include: improved telekinesis powers and online multiplayer functionality.

Gamestop open_in_new
124 Ratings
9.20
This game has not been reviewed. Be the first to review it!

9.00
GREG MILLER—Jan 21, 2011
Dead Space 2 is more than just an action game and it's more than a survival horror game -- it's a game that tells a really personal story about a guy who has been seriously scarred by the events around him. That premise alone makes it interesting, but Visceral Games melds it with rewarding combat, shocking enemies, and huge set pieces before tossing it into a world that's truly creepy and scary.
open_in_newRead full review

9.00
Sammy Barker—Jan 31, 2011
The game's slow pacing is punctuated by excellent set-pieces, with the tone perfectly crafted by the franchise's eerie blend of orchestral swells and futuristic sound effects. The series' recognisable selective dismemberment gameplay mechanic is as satisfying as ever, though Dead Space 2's combat heavy conclusion can get repetitive.
open_in_newRead full review
See all critic reviewsarrow_forward