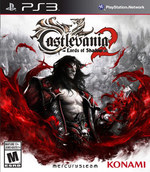 Awoken after centuries of slumber, weakened and yearning for release from his immortal bonds, Dracula must reclaim his powers and make a pact with Death, to defeat Satan and gain eternal rest. Blood is everything as Dracula faces both his nemesis and his descendant’s unyielding quest for revenge, in this final, dramatic battle between good & evil. An epic fantasy adventure set in an expansive, modern-day world. Play as Dracula and discover the ultimate fate behind the ‘Lord of Shadow’ himself!

Best Buy
94 Ratings
8.60
This game has not been reviewed. Be the first to review it!

9.00
Steven Williamson—Feb 25, 2014
Whether you’re summoning swarms of bats, morphing into a sewer-scuttling rat, or executing Satan’s beasts with a range of devilish moves before you squeeze every drop of blood out of their beating hearts, being Dracula is cool and it’s fair to say that Castlevania: Lords of Shadow 2 delivers an entertaining campaign that is hard to put down once you start. Quite simply, this is the most fun we’ve had killing monsters since carving up freaks with God of War III’s Blade of Exile.
open_in_newRead full review

8.00
Matthew Castle—Feb 25, 2014
A hefty slurp of bloodied bombast, tainted by misguided attempt to please everyone

5.00
Matt Cabral—Feb 25, 2014
Castlevania: Lords of Shadow 2 offers a solid third-person action experience in the vein of God of War and Devil May Cry. Outside of combat, it suffers from poor design decisions, dated visuals, and a disjointed story. Its biggest shortcoming, though, is that doesn't live up to the promise and potential set by its superior predecessor.
open_in_newRead full review
See all critic reviewsarrow_forward