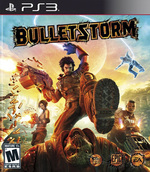 Set in a futuristic utopia, an elite peacekeeping force thwarts the rumblings of civil war. But deception within the ranks has caused two members of the most feared unit, Dead Echo, to strike out on their own. Now washed-up mercenaries turned space pirates, Grayson Hunt and Ishi Sato's latest quest for a quick buck goes south. Stumbling upon their ex-commander's warship, the Ulysses, Grayson engages this behemoth head-on. Outmanned and outgunned, his only option is to ram the Ulysses in a suicidal bid at redemption. Narrowly surviving a crash landing and now stranded on the abandoned paradise planet of Stygia, Grayson and Ishi find themselves surrounded by hordes of mutants and flesh-eating gangs. They survive on two objectives: get off the planet alive and exact revenge on the man who sent them there.

XGN open_in_new
36 Ratings
7.59
This game has not been reviewed. Be the first to review it!

10.0
David Houghton—Jun 24, 2012
Bulletstorm you see, is a very intelligent, highly intricate, and sumptuously nuanced design masquerading as a big dumb action game. In fact it’s such an evolution of the FPS experience that it’s very probably destined for that pantheon of rare games to be deemed worthy of the word “important” in a couple of years time.
open_in_newRead full review

8.00
Jeff Gerstmann—Feb 23, 2011
After being really down on Bulletstorm for the first couple of hours, I was pleasantly shocked to see how well it started coming together once I started getting better at using the different weapons and once the story started moving at a faster pace. While it's easy to see spots where the game could have been more fully featured or offered more unique areas instead of repurposing campaign spots, it's a solid new entry that truly offers an alternative to the standard sci-fi or military-themed first-person shooter.
open_in_newRead full review

9.00
Jamin Smith—Feb 22, 2011
At a time when games are brimming with gritty realism, a single-minded approach to multiplayer and oh-so-serious plots characterised by a chorus of military buzz-words, Bulletstorm is a refreshing departure from the norm. Behind the f-bombs and dick-tits are some incredibly mature and well thought out mechanics.
open_in_newRead full review
See all critic reviewsarrow_forward