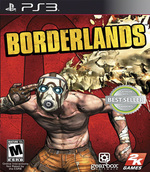 In a distant future, the planets at the outer edges of the galaxy have become a beacon to fortune seekers and those yearning for a better life off world. But there are no guarantees in deep space. Pandora, one of these distant planets, was reported to be rich in untapped mineral wealth, and so drew many hoping to get rich quick, but in the end little was found beyond the scattered ruins of a past alien civilization. With nothing to gain, any who could soon abandoned Pandora, leaving those who remained to deal with the lawlessness of a world gone bust, and the mystery of the long-dead alien civilization. But as chaotic as these times were, there were worse days yet to come. After several years the planet's huge orbit slowly brought it near to its sun and once unknown and horrifying creatures sprang from their long hibernation to terrify the stranded colonists. The only hope of the colonists seems to be a vault discovered in the side of a mountainside, rumored to contain alien technology and secrets about Pandora. Will this discovery be the colonist's salvation or their end? Discover their fate in Borderlands.

3D Juegos open_in_new
89 Ratings
9.10
This game has not been reviewed. Be the first to review it!

8.00
Jeff Gerstmann—Oct 19, 2009
The structure of Borderlands makes it feel like an MMO game that doesn't require you to rely on groups of other players to enjoy. Though it's probably better when you're playing online with friends, playing alone is still perfectly fine. It's also one of those games that's so strong in parts that its shortcomings become almost glaring by comparison. As such, the game's barebones story, lackluster AI, and insufficient player trading options are real disappointments that prevent the game from reaching its full potential.
open_in_newRead full review

8.40
Game Trailers—Oct 19, 2009
On the downside, the world can feel a bit stiff in some ways. NPCs and set piece items don’t react when you shoot them, and there are no ripples when you drive through water. Textures take a bit to load in when you enter a new area and some close-up shots reveal pixelated shadows. Borderlands is a bit of a grind-fest, but that’s part of the fun, as you take on tougher enemies and hunt for bigger and badder gear. The co-op play is integrated seamlessly, and there’s a huge world to explore with friends or on your own.

8.00
Chris Watters—Oct 20, 2009
Combat is satisfying, and upgrading your skills and equipment is engaging. The constant stream of loot and experience is rewarding, and sharing it with some friends makes the experience that much richer and more exciting. Alas, PS3 owners will have to wait for a fix in order to fight alongside their friends. Despite this upsetting issue, Pandora is still a great planet to visit if you want to shoot some stuff and reap the rewards.
open_in_newRead full review
See all critic reviewsarrow_forward