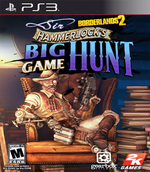 This game requires the base game Borderlands 2 to play.

In Sir Hammerlock’s Big Game Hunt, the third campaign add-on for Borderlands 2, players will enter an uncharted territory deep in the swamps of Pandora where a massive Hyperion ship has crashed. The wreckage is rumored to have stockpiles of loot. But watch out, mutated creatures, and armies of savages also have an interest in the ship. As ferocious and primal as they may seem, the mysterious Professor Nakayama claims to be their diabolical leader, and he’s calling all the shots.

Jeuxvideo.com open_in_new
24 Ratings
6.50
This game has not been reviewed. Be the first to review it!

6.90
Vincent Ingenito—Jan 15, 2013
Make no mistake, Big Game Hunt is still Borderlands 2. Combat is still satisfying, as is finding that next gear upgrade. Anyone who found the core gameplay enjoyable before will most likely find it enjoyable here, and a new raid boss offers completionists yet another feather to put in their cap.
open_in_newRead full review

7.60
Josh Wirtanen—Jan 18, 2013
Unfortunately, what it all boils down to is that Gearbox has set such incredibly high expectations with the Captain Scarlett DLC that it’s going to be nearly impossible to live up to those consistently while keeping the DLC coming out in a timely fashion. And that’s really the biggest problem with Sir Hammerlock’s Big Game Hunt; we’ve been expecting so much from it. It’s not a bad deal for ten bucks, but it’s shorter than we had hoped, there’s no level cap increase, and the Trophy/Achievement offerings are meager once again.
open_in_newRead full review