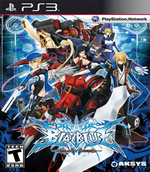 A 2D one-on-one fighting game by ARC System Works (the makers of Guilty Gear.) Produced by Guilty Gear producer Toshimichi Mori, the game features an all-original cast (including many weapon fighters) and uses a four-button control scheme (weak, medium and strong attacks plus an EX button which makes your character perform unique special attacks.) The fighting system is based around players being able to continue combos when opponents are in a down state.

3D Juegos open_in_new
7 Ratings
7.20
This game has not been reviewed. Be the first to review it!

6.00
Jeff Gerstmann—Jul 21, 2009
BlazBlue: Calamity Trigger is probably a game best suited for people who have been playing fighting games for a long time, but even then, its style seems to be deliberately divisive. It's certainly worth trying out if you're a fan of the genre, but it's entirely possible that you'll find the whole thing to be a big, loud mess.
open_in_newRead full review

8.00
Tim Empey—Apr 21, 2010
BlazBlue does, however, make a case for 2D sprites, much more so than King Of Fighters XII because the graphics are a lot smoother and they don't go all pixelated if you get too close to the screen. Also when in battle the characters talk to each other; a lot of it is just shouting but occasionally a reference pops in there and it makes the fights feel a bit more personal.
open_in_newRead full review

8.00
Jonathan Holmes—Jul 21, 2009
BlazBlue's limited edition is already sold out across the country, and the same thing may happen to the standard edition to be put on sale later this month. The game is already a hit, and it deserves it. Still, BlazBlue isn't quite up there with my favorite 2D fighters. The sometimes cliche' character designs, cumbersome story mode, small roster, and limited single player modes keep the game from being truly "top tier."
open_in_newRead full review
See all critic reviewsarrow_forward

The King of Fighters XII