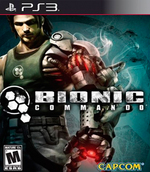 One of Capcom's all-time great franchises returns with this re-envisioned modern version of Bionic Commando. Continuing the story 10 years later (with slight modifications to character names in the re-envisioned story), gamers are once again playing the role of Nathan Spencer (aka "Rad" Spencer), a highly decorated government operative that distinguished himself in battle against a group known as the Imperials. However, Spencer finds himself betrayed by his commander known as Super Joe (who Commando fans should easily recognize).

3D Juegos open_in_new
12 Ratings
8.10
This game has not been reviewed. Be the first to review it!

8.00
Jeff Gerstmann—May 17, 2009
Bionic Commando goes back and forth between moments of great, navigation-based gameplay and a lot of little touches that don't work as well as you'd like. It makes the final product a little frustrating, because you can almost see a better game trying to bust its way out of its constraints.
open_in_newRead full review

7.60
Jonathan Marx—May 18, 2009
In the end, Bionic Commando is an interesting single-player experience many gamers are likely to enjoy. Disappointingly, the multiplayer experience is entirely forgettable, and not all of the wonderfully tacky elements of the series were well translated this time around. That being said, the uniqueness of the bionic arm and the depth of gameplay tend to make up for most of the title's flaws, though arguably so.
open_in_newRead full review

6.00
Kevin VanOrd—May 19, 2009
As you play Bionic Commando, you'll be frequently struck by all the unexplored possibilities and how often the words "if only" cross your mind. "This area would be fun to explore, if only radiation didn't stop me dead in my tracks." "That firefight could be terrific, if only the weapons had oomph." "This seems like an interesting world, if only the main character gave me a reason to care."
open_in_newRead full review
See all critic reviewsarrow_forward