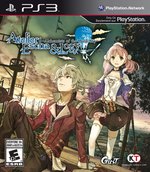 This world has gone through many Dusks, and is slowly nearing its end. Within this world, in the western reaches of the "Land of Dusk," there was a nation that prospered thanks to its use of alchemy. There, in order to survive the eventual arrival of the "Dusk End," the people devoted their efforts to rediscover and recreate lost alchemic technologies. Rediscovered technology from the past era was gathered in the alchemy research city known as "Central," where research was conducted on how to halt the advance of the twilight.

Atelier Ayesha: The Alchemist of Dusk

Jeuxvideo.com open_in_new
17 Ratings
8.50
This game has not been reviewed. Be the first to review it!

7.75
Kimberley Wallace—Mar 11, 2014
Despite its shortcomings, I still enjoyed Escha & Logy. The alchemy and battle systems continue to get more complex and impressive, making it easy to get lost in them. The urge to make one more item or explore more of the world for new materials or to best a boss rarely dims. Escha & Logy may have some flaws, but it's good at providing a formulaic experience that rewards you with seeing your progression play out before you.
open_in_newRead full review

8.00
James—Mar 12, 2014
The clever crafting and engaging combat shore up a story loaded with likeable characters in an intriguing world, and if most of the asset work is focused on character design rather than sparing a few polygons for world rendering that’s not such a bad tradeoff. Atelier Escha & Logy is a lovely RPG that should easily succeed in its goal of pleasing both series and standard RPG fans, with pleasantly deep systems and an inviting world to explore them in.
open_in_newRead full review

9.00
Dane Smith—Mar 07, 2014
Aterlier Escha & Logy fixed the problems I had with Ayesha, being the rushed feel of the universe due to the game’s mechanics, and gave a more enjoyable experience. No more did I feel like I shouldn't enjoy the alchemy system or else I’d not get anything done in the game. Atelier fans are going to enjoy the game but the more hardcore group might find the game too easy compared to previous titles. With that said, this is the perfect starting point for new gamers to try out the series.
open_in_newRead full review
See all critic reviewsarrow_forward