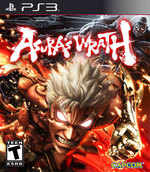 Asura's Wrath is an Action game in which players take on the role of the demigod Asura, and take on his quest for justice and revenge against the divine powers that cast him from heaven. The game utilizes a "Beat-em Up" gameplay mechanic and an episodic narrative storyline rooted in Asian mythology and sci-fi traditions. Additional features include: a range of unique enemies, planetary sized bosses, a second playable character and a devastating attack system.

XGN open_in_new
2 Ratings
5.70
This game has not been reviewed. Be the first to review it!

8.50
Jeff Cork—Feb 21, 2012
Asura’s Wrath isn’t as brainless as it may want you to believe. The ridiculous moments and likable characters kept me smiling, which was odd, considering it’s essentially a story about misery. It’s a nice change of pace from other hack-and-slash games, featuring an interesting story that’s not blocked off by insurmountable difficulty.
open_in_newRead full review

7.50
Lee Abrahams—Feb 21, 2012
Asura’s Wrath is an original, engaging and occasionally ridiculous game and as a result is certainly a novel experience, though whether it’s an experience that most gamers will be happy paying top dollar for is another matter.
open_in_newRead full review
See all critic reviewsarrow_forward