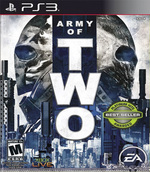 When One Man Is Not Enough?

It will take an Army of Two to stop the corruption of rogue private military corporations. Fight along side your team-mate to become the deadliest two-man military outfit a government can buy. The breakthrough gameplay in Army of Two, with a live or adaptive AI partner, enables you to take advantage of two-man strategies like customizable weapons, vehicles, and tactical shooting. If you?re going to survive, you?ll have to bring down a vast conspiracy in which the line between ?good guys? and ?bad guys? has been obliterated.

XGN
45 Ratings
8.04
This game has not been reviewed. Be the first to review it!

6.50
Joe Dodson—Mar 10, 2008
Army of Two is a better than average shooter that roughly treads on a political landmine when it should have stormed some future battlefield. It features cool co-op mechanics and is fun to play online, with or against friends. But even its title mocks the Army, literally one-upping its slogan while glamorizing a sector that, if anything, deserves scrutiny--not macho fantasy.
Read full review

7.00
Racewing—Mar 06, 2008
What we’ve got here is a game that’s deep in some places, shallow in others, and needs to be experienced just because it plays with what you’re used to. In today’s risk-averse game industry, experiments—even flawed ones such as this—deserve to be noticed.
Read full review

7.30
Game Trailers—Mar 06, 2008
With this game, one is indeed the loneliest number
See all critic reviews