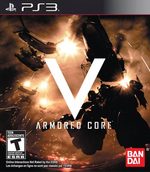 Armored Core V is a mech combat Simulation game for Next-Gen gaming consoles. The fifth major release in the Armored Core series, the game features extreme customization of the game's robot-like mechanized combat units. This customization includes the ability to create smaller mechs, and more than 500 items to customize them with. Additional features include: 10-player support in online games, a persistent online profile that tracks online and local stats, downloadable content, powerful 'one-hit kill' weapons, and the ability to trade parts and items with other players.

Playstation
2 Ratings
9.00
This game has not been reviewed. Be the first to review it!

7.00
Lee Abrahams—Mar 27, 2012
Armored Core V is certainly a deep game, but it’s also one that is let down by an underwhelming solo experience and an overly demanding online mode.
Read full review

6.50
Jeff Marchiafava—Mar 20, 2012
However, the story missions are too confusing and difficult, the order missions are too short and repetitive, and there is no in-between. I think I spent more time customizing my mech than I did fighting in it, and the solid multiplayer support can't make up for the lack of variety. A dedicated team can make the experience worthwhile, but you should play AC V under those conditions or not at all.
Read full review

6.50
Vivas Kaul—Apr 02, 2012
If you’re thinking of buying Armored Core V it’s important to realize that the true value of the game comes from playing it as a multiplayer experience. Attempting to play through the game as a single, offline player is an uphill struggle during the more difficult missions, and diminishes much of the value found here.
Read full review
See all critic reviews