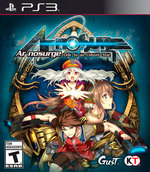 Ar Nosurge is a Fantasy, Sci-fi, '7 Dimension' RPG, that takes place in a world where music and song can create magic. It tells the compelling story of a civilization that lost their planet and has been roaming the edge of space for 2000 years in search of a new home. In Ar Nosurge: Ode to an Unborn Star, the player follows two sets of characters: Delta and Casty, whose goal is to protect humanity and save the world, and Ion & Earthes, who are trying to find Ion a way home to Earth. The player can interchange between both pairs and soon discover a way to combine their storylines and strengths to eventually solve the mystery that shrouds their ongoing struggle. Developed by Gust, Ar Nosurge: Ode to an Unborn Star is an intricately deep turn-based RPG and includes a detailed synthesis system for players to create their own items.

Ar nosurge Plus: Ode to an Unborn Star

Gamestop
1 Rating
6.00
This game has not been reviewed. Be the first to review it!

8.50
Jae Lee—Oct 22, 2014
Of course, there’s plenty more to this game like the synthesis, hot spring conversations and purification, but those mechanics are just icing on an already moist and delicious cake. Spanning well over thirty hours with five different endings, there’s a great deal of fun to be had in the world of Ar nosurge. It’s just unfortunate that the lack of localization for the prequel ends up hurting the full enjoyment of this great sequel.
Read full review

8.00
Zack Reese—Oct 14, 2014
Despite the annoying setbacks in its localization, mixed performance and confusing introduction thanks to a lack of context, Ar nosurge: Ode to an Unborn Star is still an excellent game that offers a huge amount of content for players to sink their teeth into, including a simple crafting system. Most notable to me is the excellent execution on its memorable character development and presentation, topped off by a downright brilliant soundtrack. This title is certainly worth the time of any fan of the JRPG genre.
Read full review

7.00
Lee Cooper—Oct 06, 2014
Ar Nosurge is a confounding and constantly unfolding theater of romantic ideas and sci-fi absurdity. ...it’s an engaging, frequently touching adventure about love, ambition and overcoming uncertainty. It’s as messy, disjointed and confusing as it is brilliant, cavernously deep and emotionally charging. Forgive its flaws, though, and there’s a lengthy — albeit dialogue heavy — adventure worth its weight in nuts and bolts.
Read full review
See all critic reviews